Odors occur all over locations that prepare and serve food and drink, such as restaurants and hotels, and will subsequently have a great impact on the way guests view the overall atmosphere and quality of a catering facility. Restaurant odors can make or break the success of a new food and beverage business and it is vitally important to make sure that restaurant odors are kept under control throughout the location so that the business can flourish and guests will enjoy their meal without any complaints or displeasure.

Any location that is preparing and serving food and beverages will generate some build up of restaurant odors that occur from food preparation as well as bodily fluids such as sweat caused by the heat and humidity that are predominantly present in kitchens. Restaurant odors become embedded in the furnishings and furniture all over the restaurant and are difficult to remove fully once they have gotten trapped in the fibers of materials such as carpets and curtains. As well as restaurant odors continuing to produce acrid smells and causing an unpleasant environment for the patrons and staff alike, the microorganisms will begin to reproduce and cause bacteria and pollutants to thrive in the air and cause an unhealthy and potentially dangerous situation for all the people who will breathe in the surrounding air.

Ozone technology is green and can eliminate the entire array of restaurant odors from a facility without having to use any chemical substances or perfumes in the process. As well as being able to purify the air quickly and easily, it also prevents the odor molecules from returning and can operate with minimal supervision and maintenance. This technology is based upon the action of ozone in the atmosphere; it is often referred to as ‘nature’s air purifier’ and is a natural way to eliminate all the restaurant odors completely.

Ozone is natures' air purifier and kills mold, mildew, bacteria and odors. Ozone is created in electrical storms and is nature's way of getting rid of odors naturally. The word "ozone" is derived from the Greek word "ozien" which means "to smell." In high levels, ozone is bluish in color - and this is why the sky is blue. Ozone was discovered in the late 1800's and is classified as the second strongest oxidizer in the world.

Ozone molecules destroy all of the individual characteristics of restaurant odors and neutralize the negative ions so that they will then disperse naturally back into the atmosphere and not return once a masking chemical has worn off. Many people, especially when they are eating, will be put off by the strong and over powering scents of chemical and perfume based cleaners that would be traditionally used to deal with restaurant odors, and ozone allows for customers to eat in peace, with no restaurant odors present, as well as not chemical based alternatives.

Thankfully, there are tools and actions restaurateurs may use to keep restaurant odors at bay. The QT Hurricane Ozone Generator gives you the convenience of a 7 day 6 cycle programmable timer. It has a variable ozone output control which will produce between 80 - 1800 mg/hour of ozone. Using the QT Hurricane on a daily basis will ensure to keep the kitchen’s interior smelling like fresh air. The ozone output is strong enough to remove odors from up to 20,000-square feet of space. The list of the types of odors that we are referring to includes, but isn't confined to stale beer, sour mops, spoiled foods and stagnant water.

The QT Hurricane is 8.75-inches tall, 7.5-inches wide and 11.75-inches long so it can easily be tucked away in an inconspicuous area of the kitchen and set to kick on automatically after the restaurant closes. The units will last for up to 20-years and come with a 5-year warranty from the manufacturer. Click here to learn more about the Queenaire QT Hurricane and remove your restaurant odors naturally and permanently.  You can learn more about ozone by viewing our informational videos in our Video Library. 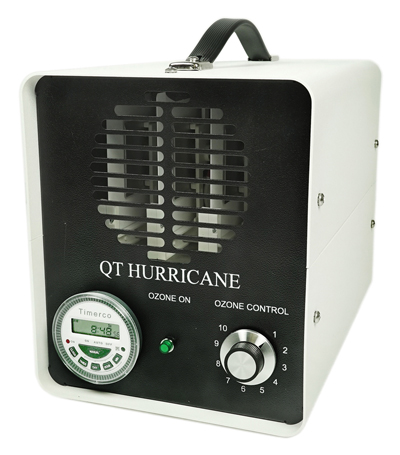