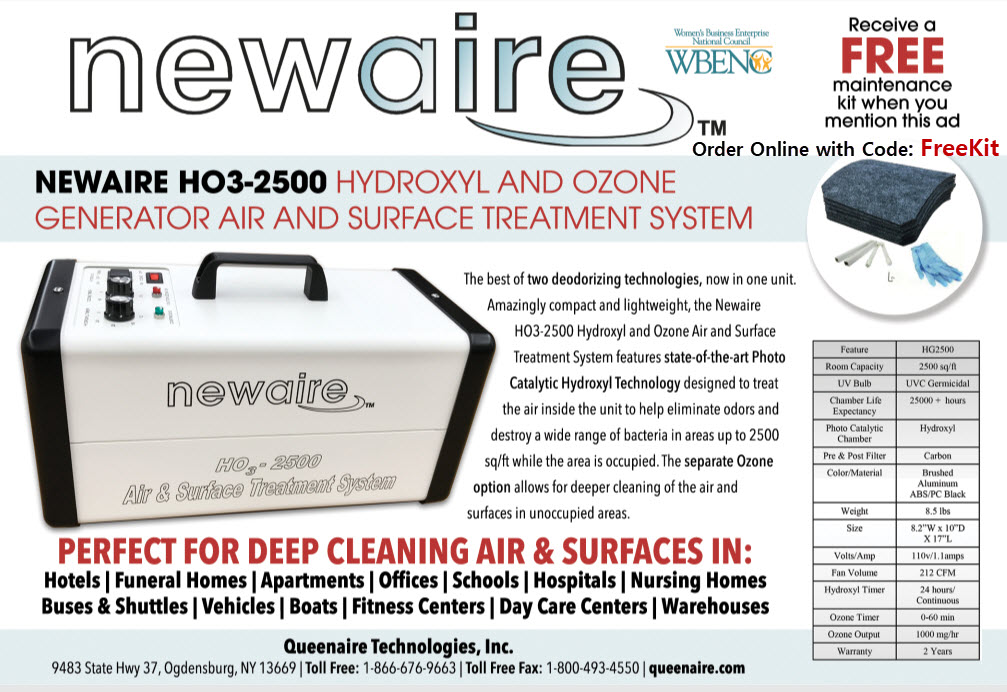 The best of two deodorizing technologies, now in one unit. Amazingly compact and lightweight, the Newaire HO3-2500 Hydroxyl and Ozone Air and Surface Treatment System features state-of-the-art Photo Catalytic Hydroxyl Technology designed to treat the air inside the unit to help eliminate odors and destroy a wide range of bacteria in areas up to 2500 sq/ft while the area is occupied. The separate Ozone option allows for deeper cleaning of the air and surfaces in unoccupied areas.

The Newaire HO3-2500 Hydroxyl and Ozone Generator Air and SurfaceTreatment System is designed to help kill bacteria and viruses while permanently eliminating odors. The main benefit of using a true hydroxyl generator is that they are safe to use in occupied areas for deodorization purposes. Hydroxyl technology is perfect for removing odors while killing viruses and bacteria in occupied spaces such as:

This unique product offers the enhanced option of a built in Ozone Generator to allow for deeper cleaning when the space is unoccupied.

What Is A Hydroxyl Radical? The hydroxyl radical, •OH, is the neutral form of the hydroxide ion (OH–). Hydroxyl radicals are diatomic molecules that are highly reactive and very short-lived with an average half-life of less than two seconds. The hydroxyl radical which was first discovered by scientists in 1963 is often referred to as the “detergent” of the troposphere, or the lowest part of the atmosphere, because it reacts with many pollutants and helps destroy them. It also has an important role in eliminating some greenhouse gases like methane and ozone.

Atmospheric hydroxyl radicals should not be confused with free radicals that are produced in
side living organisms. Atmospheric hydroxyl radicals are so reactive that they are instantly neutralized when they make contact with any substance and would be impossible to ingest as a complete ion. This is the fact that makes hydroxyl radicals, which are in the outside air at all times during the day, one of the safest processes for deodorizing in an occupied area. Hydroxyls are formed in nature by the reaction of UV light from the sun disassembling water vapor (H20) to get a hydrogen atom and oxygen (O2) which are combined together to form the hydroxyl radical (*OH).

Technology Behind Radicals. All hydroxyl generators currently used in the restoration industry incorporate some form of UV light in their process. UV light has three major spectrums: A, B and C. UVA is in the 315nm to 400nm wavelength and is what is commonly referred to as a “black light,” which makes white things glow and is considered safe for vision and skin contact. UVA lamps do not produce ozone. UVB is in the 280nm to 315nm wavelength. These are the lights in tanning salons. UVC is the 100nm to 280nm wavelength. These lamps are “germicidal” and can damage your eyes and skin. UVC lamps in the 185nm spectrum produce large amounts of ozone.

Some manufacturers use UVC lamps in the 185nm to 254nm wavelength with no catalyst whatsoever and claim to make hydroxyls. These units are nothing more that ultraviolet ozone generators and should be avoided. Other manufacturers use the same UVC 185nm to 254nm wavelength UV lamps but also incorporate reactive metals like titanium as a catalyst to create hydroxyls. These machines would probably make more hydroxyls then the first process described above but they also produce ozone and should be considered for use in unoccupied areas only. The third technology which was developed with the National Aeronautics and Space Administration (NASA) utilizes UVC light in the 254nm wavelength to excite nano-sized particles of Titanium Dioxide to generate hydroxyl radicals.

This process has been deemed safe by NASA (it has been used in the space station) and also certified by the Federal Drug Administration (FDA) as a Type 2 Medical Device that is approved for use in hospitals, including neonatal and baby wards.